William Hulstein was born in Bennekom, Netherlands, the oldest son of Cornelius and Rikje (Van Roekel) Hulstein. He was born on Oct. 10, 1858. The family farmed in Holland until April 1871, when they left for the Pella, Iowa, area. Although the family liked Pella, Mr. Hulstein wanted to go further in the great free land. So in May 1878, he adventured to Sioux County. The land seemed to be fertile and good to cultivate into crops.

On this trip, Cornelius was holding the horses, when he got the halter rope around his finger. The horse pulled and damaged muscles in his arm and hand. so, in June, his oldest son William followed him to Sioux Center to see how his father was getting along. The following February (1879), the remainder of the family joined them there.
Life was not easy. Diphtheria took a younger sister. Grasshoppers and a hailstorm took their first crop. Winter 1880-81 was severe with mountains of snow.

William married Sjoertje (Susie) De Vries. Susie had been born in Franker, Friesland, Netherlands in 1863. She was the youngest child of Syie and Johanna (Wynia) De Vries. She had come to America just 3 years before her marriage to William, Nov. 21, 1883. 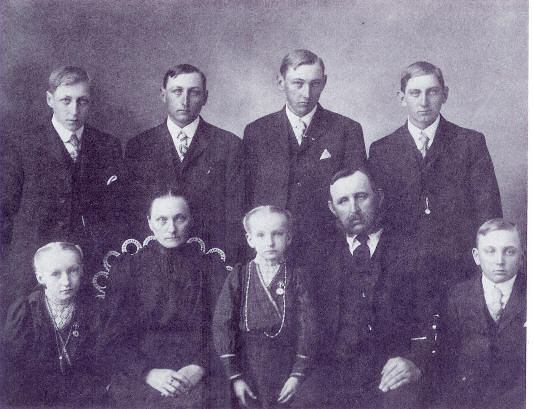 They began farming 1/4 mile east of the present north side of Sioux Center. William's father had bought this land for $2.50 an acre. Later, they bought 160 acres, 3 miles west and 1/4 north of No. Sioux Center.

They grew most of their own food of which some was stored in cellars. Beans and apples ware dried and hung in a cool place. Dried beef was kept in the oats bin while pork was stored beneath lard after butchering.

William served as one of the charter members of the Farmer's Co-op Society Board of Directors. This enterprise was organized in May of 1907.

They had 5 sons, Cornelius, Johannes, Richard, Seine, and Gerrit and 2 daughters, Johanna and Reka. All 7 lived their lives in the Sioux Center area and have died there. Many of the 12 grandchildren live in this area yet.

Another youngster was taken into the family after the death of William's sister, Cornelia (Hulstein) Dolieslager. The child, Gerrit Dolieslager, was only a few weeks old at the time of his mother's death. After 40 years of marriage, Susie died; 1923. Later, William retired on his original farm 1/4 mile east of Sioux Center which had been kept in the family all the while. William died in 1947.

Johannes never married. He farmed west of town for many years. 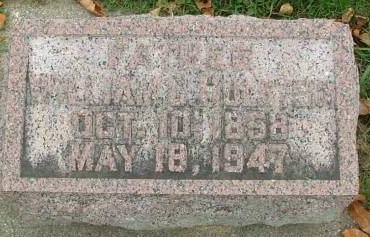 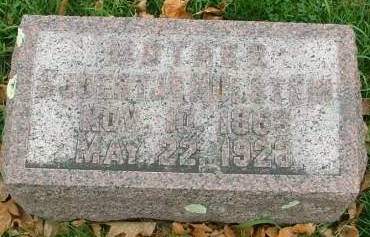 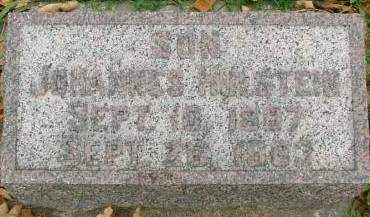 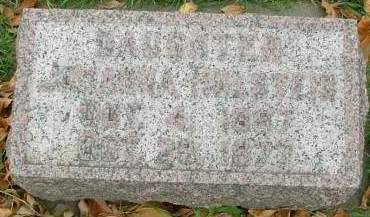 On Tuesday morning May 22 at 3:30 o'clock Mrs. Wm. Hulstein succumbed to pneumonia.

Mrs. Hulstein was born in the Netherlands and came to this country at the age of 17 years.

She was 59 years old at the time of her death.

Mr. William Hulstein, sr. passed away at his home Sunday evening, May 18, 1947 at the age of of 88 years. He had been ailing for several months due to the condition of his heart.

The family first settled at Pella and made their home there for eight years. They then came to Sioux County where he spent the rest of his life in the immediate vicinity of Sioux Center.

He was united in marriage to Sjoortje De Vries who preceded him in death on May 22, 1923.

Two sisters and a brother also preceded him in death.

He is now survived by 5 sons, Cornelius, Johannes, Richard, Seine, and Gerrit, and two daughters Johanna and Reka (Mrs. Joe Horstman) all of Sioux Center. There are also 12 grandchildren and two great grandchildren and a brother Steven Hulstein sr. who survive.

Funeral services were held on Wednesday afternoon, May 21, at pne o'clock at the home and at 1:30 at the First Reformed Church. Rev. L.A. Brunsting officiated.

Burial took place in the family plot at the local cemetery and his five sons and the son-in-law were the pallbearers.

Services were at 10:30 a.m. Thursday in the First Reformed Church. Dr. Thurman Rynbrandt officiated. Burial was in Memory Gardens Cemetery.

Services were at 10:30 a.m. Tuesday at First Reformed Church in Sioux Center. Dr. Thurman Rynbrandt officiated. Burial was in Memory Gardens Cemetery in Sioux Center under direction of the Memorial Funeral Home of Sioux Center.

Miss Hulstein was born Oct. 4, 1897, in rural Sioux Center and lived her entire life near and in Sioux Center. She lived at Sioux Center Community Hospital Wing the last four years.

She was a member of Priscilla Circle of First Reformed Church.