Gerrit and Caroline (Ver Ploegh) Hulstein lived in the rural Carmel area all of their family life. They were farmers and lived on the same farm where they raised their children.

Gerrit liked to "break in" wild horses in the fall and sell them in the spring. Horses were the "horse power" used in all the farming operation. He was a very able gentleman and loved handling animals. The family had a large garden and orchard. A peddle wagon from the Carmel store would come around to sell the groceries that were not produced on the farm. Their first car was purchased about 1917. 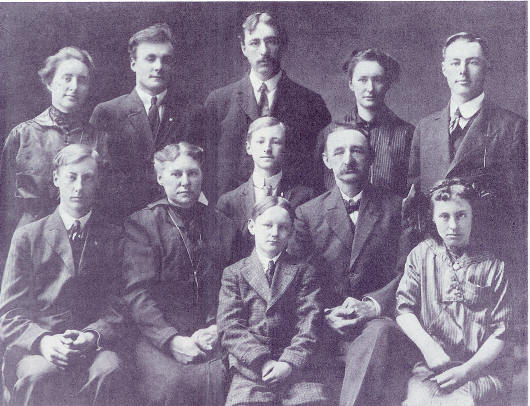 Their nine children were as follows:

"Hattie" Rykje Hulstein was born May 7,1887. She married Ralph Kastein. They lived at Doon, lowa, and had seven children.

"Pearl" Peterje Hulstein was born Sept, 16, 1889. She married Peter Bos. They were from Sioux Center and the parents of six children.

"Neal" Cornelius Hulstein was born Nov. 26, 1891. He married Clara Vermeer. They were from Sioux Center and the parents of eight children.

"Conrad" Coenraad Hulstein was born July 26, 1894. He married Grace Van Maanen and they were the parents of eleven children.

Willem Cornelius Hulstein was born Oct.5, 1897. He married Ann Schuiteman. They were from Sioux Center and the parents of five children.

"Henry" Hendrik Jan Hulstein was born Sept. 12, 1900. He married Alice Juffer. They were from Sioux Center and the parents of five children.

Steven Hulstein was born August 5, 1903. He married Pauline Ver Hoef. They were from Sioux Center and the parents of two chi1dren.

Johanna Margaret Hulstein was born Nov, 5, 1904. She married George Lihudis. They were from Sioux Center and the parents of two sons.

"Raymond" Edward Reymon Hulstein was born Nov. 3, 1908. He married Della Gritters. They were from Carmel and later moved to Edgerton, MN, and were the parents of thirteen children.

A picture of this family also accompanies the Gerit Hulstein story by Eunice and Cheryl Hulstein. 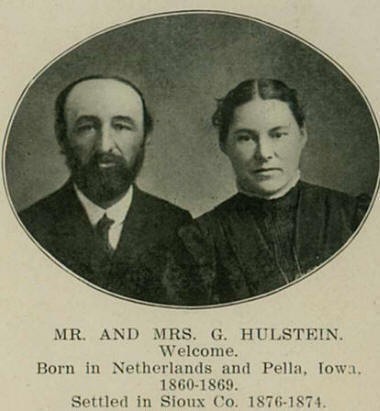 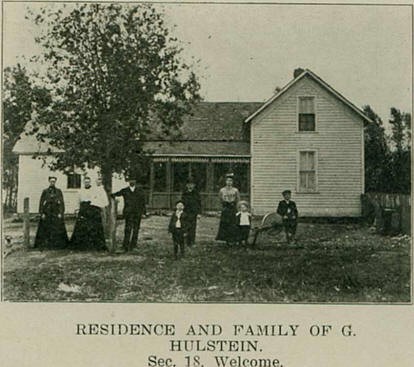 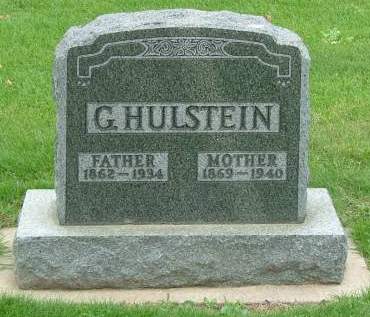 Website Find A Grave
Obituaries of Gerrit and Cornelia

Mr. Aart Schuiteman died Friday at midnight after being ill since Monday. Mr. Gerrit Hulstein dropped dead Friday morning of a blood clot in the arteries near the heart.

Mr. Hulstein succumbed to a heart attack Friday morning. He had put on his wraps and was just about to open the door preparatory to going to town for groceries when he collapsed and died without regaining consiousness.

He had plannes to go to Sioux City that day with Mrs. Hulstein to visit their son, Raymond, who was in hospital there following an eye operation.

Mr. Hulstein was born in the Netherlands January 3, 1862. At the age of nine he, with the rest of the family immigrated to America. They first settled at Pella where they lived for a few years before they again moved to a more virgin country.

Forty-seven years ago he was united in marriage to Miss Cornelia Ver Ploeg by Rev. James De Pree. The young couple settled on a farm northwest of town where they lived happily until 1919 they retired and moved to Sioux Center, building the house in which they now live.

Mr. Hulstein is survived by his widow; nine children, Mrs. Ralph Cassen, Canton; Mrs. Peter Bos, Sanborn; Neal, Conrad, Will, Henry, Steven, Mrs. George Lehudis, and Raymond, all of whom live in this vicinity; and two brothers, Steven and Will; and 42 grandchildren.

Rev. J.H. Keuning conducted the funeral services, which were held at the home and in the Central Ref. Church.

They were Mrs. Minnie May Forgie and Mrs. Cornelia Van Drimmelen. Mrs. Forgie passed away in the Hull hospital after a lingering illness of several weeks, while Mrs. Van Drimmelen died very suddenly in her home after a heart attack, last Thursday morning, November 14th.

Mrs. A. Van. Drimmelen passed away very suddenly at her home at about 10:35 o'clock Thursday morning, Nov. 14. She had passed her 71st birthday.

Mrs. A. Van Drimmelen, daughter of Koenrad Verploeg and Petertje de Kock was born south of Pella, Iowa on March 9, 1869. The family moved to Sioux County about 1875.

In 1886 she married Gerrit Hulstein and settled on a fram 1˝ miles north and west of Sioux Center. Mr. Hulstein died Jan 25, 1934. 9 children were born - all left to mourn the loss of a devoted and loving mother.

The Lord has given, The Lord has taken, blessed be the name of the Lord. Our loss is her gain. She was a devout Christian woman, always wanted to do something for other people never asking for anything, happy in the thought that she had a desire to do some thing for her Saviour Christ Jesus.

So - Let us think of her faning on as dear. In the love of there as the love of Here; Think of her still as the same today; She is not dead - She is just away.

Funeral services where held Monday afternoon, Nov. 18 at her home at one o'clock and at 1:30 o'clock at the Central Reformed Church with Rev. .R. D. Meengs her pastor in charge. Interment was in Sioux Center cemetery.