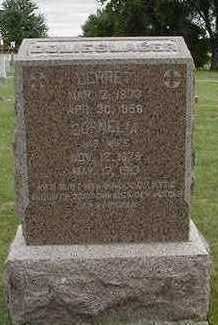 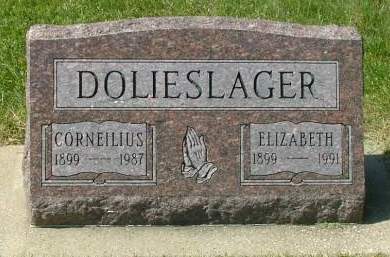 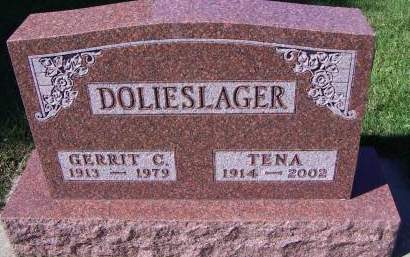 Website Find A Grave
Obituaries of Cornelia, Gerrit and Effie

A sad death occurred last week Friday when Mrs. G. Olieslager passed away at the age of 36 years leaving a mourning husband and six children, the youngest being three weeks.

The funeral, which was held last Tuesday at the Second Reformed church, was attended by many people all feeling the great loss suffered.

Mr. Dolieslager was born at Hoorlemermeer [sic], Netherlands, March 2, 1873. He came to America at the age of 11 and first settled at Cincinnati, Ohio.

He then lived at Orange City for several years after which they moved to the Sioux Center community, where he lived until the time of his death.

He married Cornelia Hulstein who preceded him in death May 17, 1913.

She was married to Gerrit Dolieslager Sr. on July 30, 1914, in Sioux Center. The couple resided in Sioux Center, until 1967 when she moved to the Christian Retirement Home in Sheldon.

Mrs. Dolieslager was a member of the Netherlands Reformed Church of Sioux Center.

Website Find A Grave
Obituaries of Cornelius and Elizabeth

Dolieslager was born August 19, 1899, in Sioux Center, where he lived his youth and attended school.

He was a member of Bethel Christian Reformed Church and served as deacon.

Survivors include his wife; two sons, Gerald and Corwin, both of Sioux Center; two brothers, Bill of Osseo, Minnesota, and Bob of Sheldon; a sister, Nellie De Vries of Montevideo, Minnesota; and seven grandchildren.

Services were at 1:30 p.m. Monday, October 21, at Bethel Christian Reformed Church in Sioux Center with the Rev. Robert Holwerda officiating. Burial was In Memory Gardens Cemetery.

The former Elizabeth Proper was born June 29, 1899, at Sheldon. She lived her youth in the Sioux Center area and attended Sioux Center Christian School.

She was a member of Bethel Christian Reformed Church and a member of the Sunshine Circle.

Website Find A Grave
Obituaries of Gerrit and Tena

Gerrit was born April 30, 1913, the son of Gerrit and Nellie Dolieslager at Sioux Center, Iowa.

On June 30, 1933 he married Tena Houtsma at Orange City and the couple farmed near Orange City.

Mr. Dolieslager is a member of the First Christian Reformed Church in Orange City.

Services for Mr. Dolieslager will be held on Wednesday, January 17, 1979 at 10:30 a.m. in the First Christian Reformed Church in Orange City. Rev. M.S. Jorritsma will officiate. Special music will be provided by Mrs. Peter Jeltema on the organ and a duet by Mr. and Mrs. Ronald Schaap. The selection will be "How Great Thou Art".

Casket bearers will be Gerald Vande Brake, Harold Vander Kieft, Harold Sneller, Russell Wichers, Bob Vande Brake and Ted Kaemingk. Interment will be in the West Lawn Cemetery of Orange City with arrangements being made by Van Gelder Funeral Home of Orange City.

Mr. Dolieslager was preceded in death by an infant son, Nelton Dean.

Services will be 1:30 p.m. Wednesday at First Christian Reformed Church in Orange City, with the Rev. Timothy Ouwinga officiating. Burial will he in West Lawn Cemetery. Visitation will be after 3 p.m. today, with the family present 7 to 8:30 p.m., at Oolman Funeral Home in Orange City.

Tena was born June 4, 1914, in Ocheyedan, Iowa, the daughter of Albert and Anna (Wibben) Houtsma.

On June 30, 1933, she married Gerrit Cornelius Dolieslager in Orange City, they farmed at Pease, Minn., for a few years, then farmed west of Orange City.

She was a homemaker and sold Stanley Home Products for more than 20 years.

Mrs. Dolieslager was a member of First Christian Reformed Church, where she was active in the women's organizations. Her hobbies were violet and rose gardening and crocheting. She loved spending time with her children and grandchildren, and she enjoyed playing cards with her family and the staff at Heritage House.

Survivors include her son and his wife, Darrell and Mary Ellan Dolieslager of Orange City: two daughters and their husbands, Joan and Herb Bruxvoort and Nancy and Bob Van Zee. all of Orange City; a son-in-law. John Van Ravenswaay of Florida: 17 grandchildren; 33 great-grandchildren; six great-great-grandchildren: a sister. Marie McGowen of Corpus Christi, Texas; and a special friend, her roommate, Margaret Van't Hof.