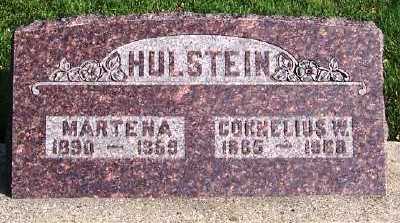 Website Find A Grave
Obituaries of Martena and Cornelius

Funeral services for Mrs. C.W. Hulstein, 60, long-time resident of Sioux Center who died Sunday, August 16, at the Sacred Heart Hospital in Le Mars after several months of illness, were held at the First Reformed Church in Sioux Center at 1:30 p.m. Wednesday, August 19.

Services were conducted by the Rev. Marion Klaaren and burial was made in the Carmel cemetery. Co-op Funeral Service of Sioux Center was in charge of arrangements.

A brief service was held at the Little Chapel preceding the service at the church.

Mrs. Hulstein was born in the Netherlands on August 10, 1890. She was the daughter of the late Mr. and Mrs. Wm. Plantage.

On February 23, 1916, she was married to Cornelius W. Hulstein at Sioux Center, Ia., where she spent the remainder of her life.

She was preceded in death by her parents, Mr. and Mrs. Wm. Plantage, two sisters, and three brothers.

Survivors include the husband, son William, of Hull, daughter Arta (Mrs. Marion Jans) of Jasper, Minn., one sister, Mrs. Kopenhagen, in the Netherlands, Gerrit of Sioux Center and Edward of Alvord, Ia., and 7 grandchildren.

Funeral services were held at the First Reformed church here at 10:30 a. m. Thursday April 11, for Cornelius W. Hulstein, 83, retired farmer, who died April 9 at the Sioux Center Community hospital.

Services were conducted by the Rev. Jack Boerigter and burial was made in the Carmel cemetery under the direction of the Co-operative Funeral Home of Sioux Center.

He was married, to Martena Plantage February 16, 1916, and the farmed in Sioux Center vicinity throughout their married life.