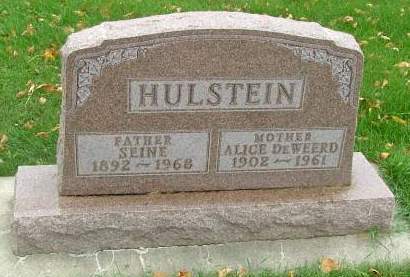 Website Find A Grave
Obituaries of Alice and Seine

Funeral services were held at the First Reformed church here for Mrs. Seine Hulstein, 58, life-long resident of Sioux county, who died at the Sioux Center Community hospital May 31.

Services were conducted by the Rev. Harry Brower and burial was made in the Sioux Center Community cemetery under the direction of Vander Ploeg's Funeral home.

Mrs. Hulstein, nee Alice De Weerd, was born at Maurice, Iowa, September 11, 1902, and grew to young womanhood in that vicinity.

She was married on March 31, 933, to Seine Hulstein at Orange City.

Mrs. Hulstein was a member of the First Reformed church.

Funeral services will be held at the First Reformed church here at 10 a. m. today (Thursday) for Seine Hulstein, 76, of Sioux Center, who died October 1 at the Orange City hospital.

Services will be conducted by the Rev. Jack Boevigter and burial will be made in the Sioux Center Community cemetery under the direction of Vander Ploeg's Funeral home.